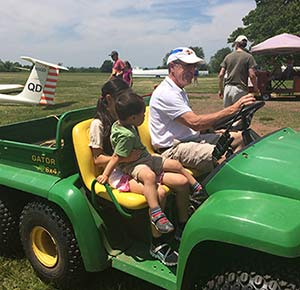 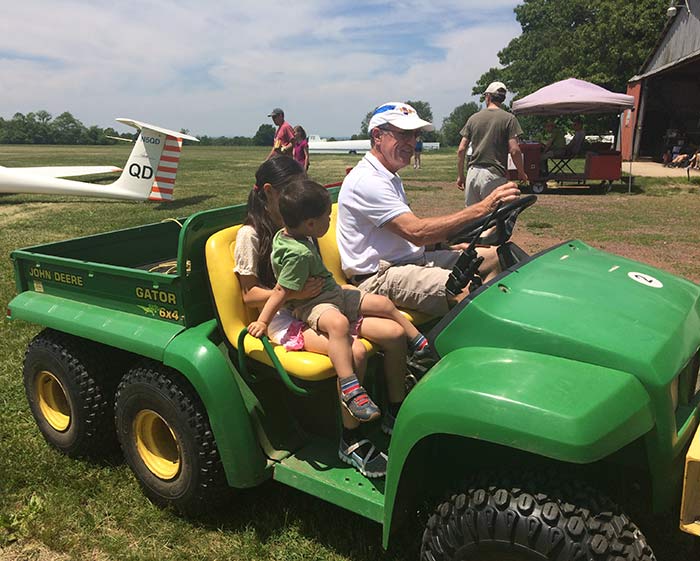 Dear PGC friends, It was a great day yesterday with good thermal activity in the morning enabling me to get up to the secondary wave coming off Mt. Abraham. Climbed to over 9,000 feet MSL (mean sea level). There were scattered cumulus clouds thousands of feet below me, and the sun shining down on them, with the sapphire blue sky overhead, it was dazzling. Superimpose this on the autumn-leaved Vermont hills, and you can imagine the aesthetic reward of soaring.

Today there were no thermals but good westerly wind. Locals who went up earlier told me that the aero tow would be bumpy, but wave was good. (I rigged at 15 meters wing span both days.) At about 1,000 agl (above ground level) we hit the bottom side of the lee rotor. I was belted, to the restricted-breathing degree of tightness, but I none the less was doing the cranial tap dance on the canopy. I was fully busy, and it was tough to keep feet planted on rudder pedals. I stuck with the tow until getting to the up side of the rotor; which I thought was the beginning of the wave. I had released from the tow plane at 2,500 agl and had retracted landing gear, but it became evident that I had miscalculated. I had slowed down too early and got blown back to the lee side. I got a good look at the valley from many interesting pitch and bank angles as I listened to the gear doors opening and then flapping shut on their springs. The glider made noises I have hitherto not been familiar with, but it held together and compensated for my errors well enough to let me climb back through to the upside of the rotor until hitting the wave. Very-very smooth lift. It was completely noiseless in the glider, with the exception of the radio chatter-much of it in French, vario beeping, and the clatter of my heart valves at over-speed. This experiment demonstrated that it takes about 10 minutes for a full adrenalin load to work its way through the system. I put in 1 click of down flaps and nosed into the wind staying parked over Mt. Abraham's lee slope. The vario was giving 6-10 kts indication and airspeed was about 50 kt... Zero ground speed through much of the climb to over 11,000 msl. A nice fellow I met at Sugarbush, (Rich Geilert) had oxygen and managed 18,500 msl at nearby Mt. Mansfield. I had only ambient air, 60 year old lungs, and decided that 11,000 + change was going to be my personal limit without O2. There was some scattered high cirrus, but there were no cumulus clouds below, nor was there a cloud in the rotor, so I wasn't worried about being trapped up top. The rotor was much bigger than I had anticipated. I thought it would only be strong nearer to the top of the wave; like the wave I once flew in at Crystalaire in the Mojave coming off the San Gabriel Mountains. I was wrong. Not having oxygen, I couldn't ride the wave to the top and let it take me to the down side in its smooth lee descending air. So, to descend I had planned to fly away from Mt Abraham and go North to get out of the up wave and then fly back around easterly to the down side and sneak under the rotor that was parked over the airport. The first parts worked out pretty well, but I couldn't completely avoid the turbulence. Sugarbush airport is in the narrow valley between the Mt. Abraham-to-Mansfield line of mountains to the west (3-4,000 msl), and a lower ridge (2-3,000 msl) to the East. It's a narrow valley, and when I got below 5000 MSL, it seemed that the whole valley was full of very chaotic turbulent wind as the descent continued to pattern altitude. The pattern was bumpy but not bad, and at 300 agl it got fine. Oddly, at ground level there was really almost no surface wind at all.

Tow and tie-down fees for the two days were very reasonable. The first day you fly at Sugarbush you have to have a local checkout; which costs something. I had done it in 2004 though. I'm definitely planning to attend their wave camp next year. If any other Philadelphia Glider Council members have interest, we could trailer our planes up for an expedition and rent a local vacation house for a few days.