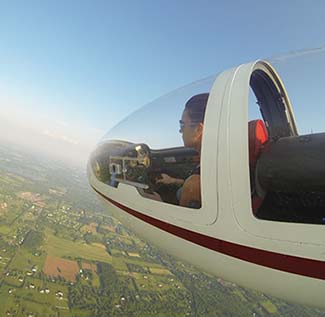 Though women were among even the earliest pioneers in aviation, traditional gender roles have largely directed men and boys towards flight training to a much greater degree than women. Beyond the force of cultural habit there is no supportable rationale for this state of affairs, and girls and women have steadily been gaining access to aviation in the civilian, military, and sporting branches of the aviation tree. PGC has long been committed to providing a welcoming outreach to female aviators.

READ BETH'S STORY ON REALIZING HER DREAM OF FLIGHT

For more information about women in the sport of soaring, check out the Women's Soaring Pilots Association website. They also list flight training scholarships and mentoring for women who want to take their place in the sky. Incidentally, the history of women in aviation is a fascinating study in overcoming cultural barriers and a Google search of the subject will well reward some of your time.

As a very little girl, I stood with my father one day in our driveway. He pointed past the fields and up over the hills into the northern sky, "Look", he said, "There's a glider!"

But this was 1946 or 1947, and my parents were struggling farmers with a herd of Jersey cows and four small children. No one even thought of flying. We played in the creek, rode horses and went to one-room schools, but still we would sometimes look skyward and see gliders flying from the nearby PGC airfield.

Years went by. My parents stopped farming, and we grew up, married, and moved away with children of our own. The Farm was taken under eminent domain for part of Peace Valley Park, but years later Bob and I were able to buy the Farm back and return to the area.

At some point later, as I was driving up route 152, a glider came in for a landing right over my head. I looked up, and said to myself, "Oh, I want to do that!" Knowing what I now know, it could not have really been right over my head, but it felt that way. The next weekend, I drove over to the PGC glider port, walked up to the red flight operations desk and asked if I could have a ride. All I wanted was a ride.

As it happened, a sailplane was there and ready. An instructor added some ballast to the front of the glider (Ballast is used to balance the glider for small front seat occupants.) strapped me in, and we took off. It happened so fast that I didn't even have time to be nervous. As we reached the desired altitude, he told me, "Pull that yellow knob by your knee," (Tow rope release knob.) and I felt a sense of release, freedom and a surge of joy, "Oh. Oh. I love it." The pilot banked the wings to the right, and we silently and gracefully turned towards the east and again, "Oh. I love it." The peace, the power, the surge of joy.

When we eventually landed, I hopped out, and asked right away, "Where do I join up?"

We still live at the Farm, and on weekends if I am not at the Club the distant growl of the tow plane engine causes me to glance skyward, just as I did all those years ago, and think to myself, "Look. It's a glider."